Base planes and Timeline

Base planes are surfaces created to simulate a base of a measured object. Base plane is important because volume measurements directly depend on it. With a correctly selected base plane one can come pretty close to measuring exactly what is intended. 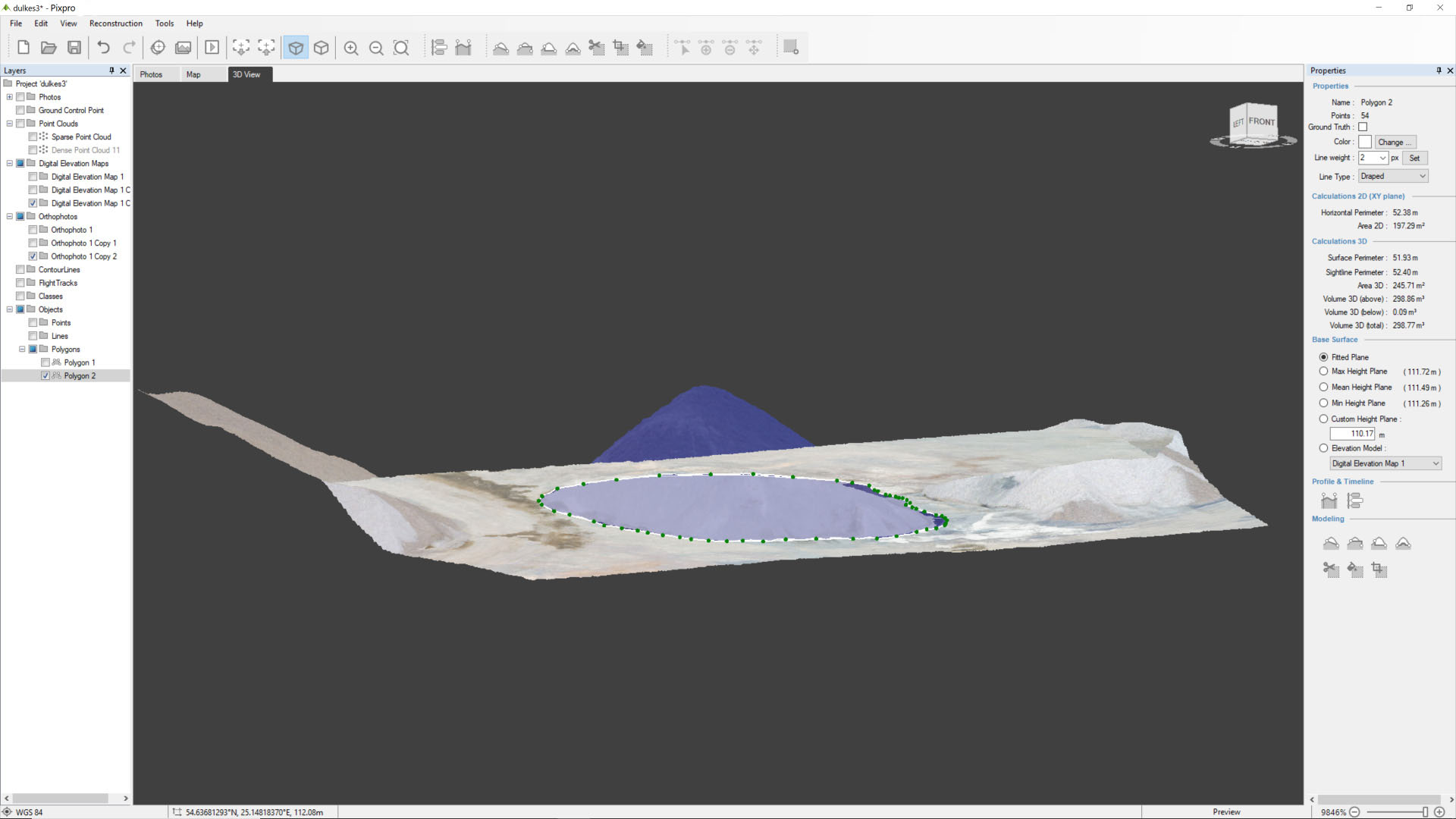 A more schematic fitted plane view. The plane itself is represented in grey. The white line is the perimeter of the designated polygon. Cyan wireframe is the DEM surface that falls outside the polygon selection, while blue is the area that is inside the selection. 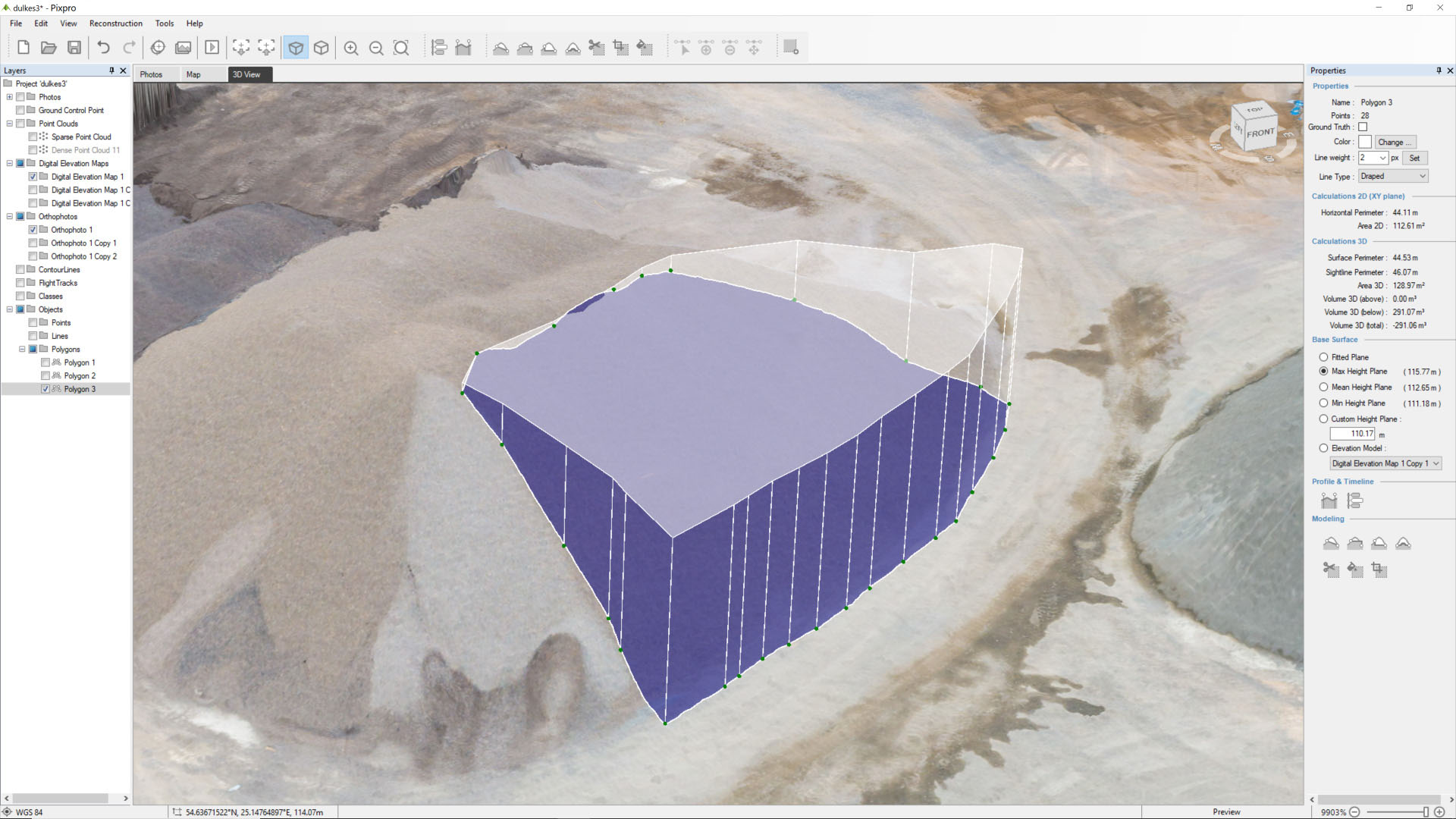 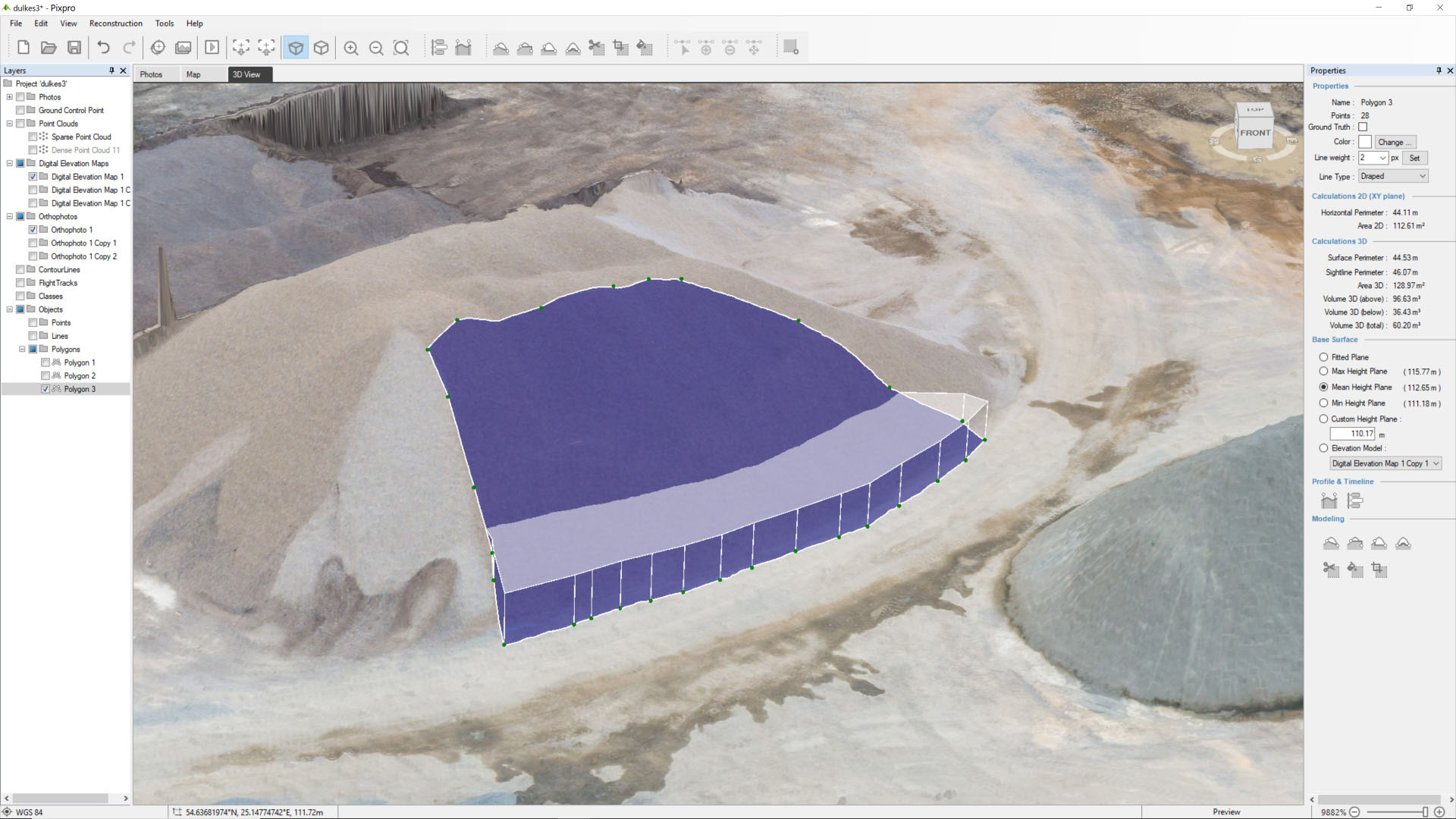 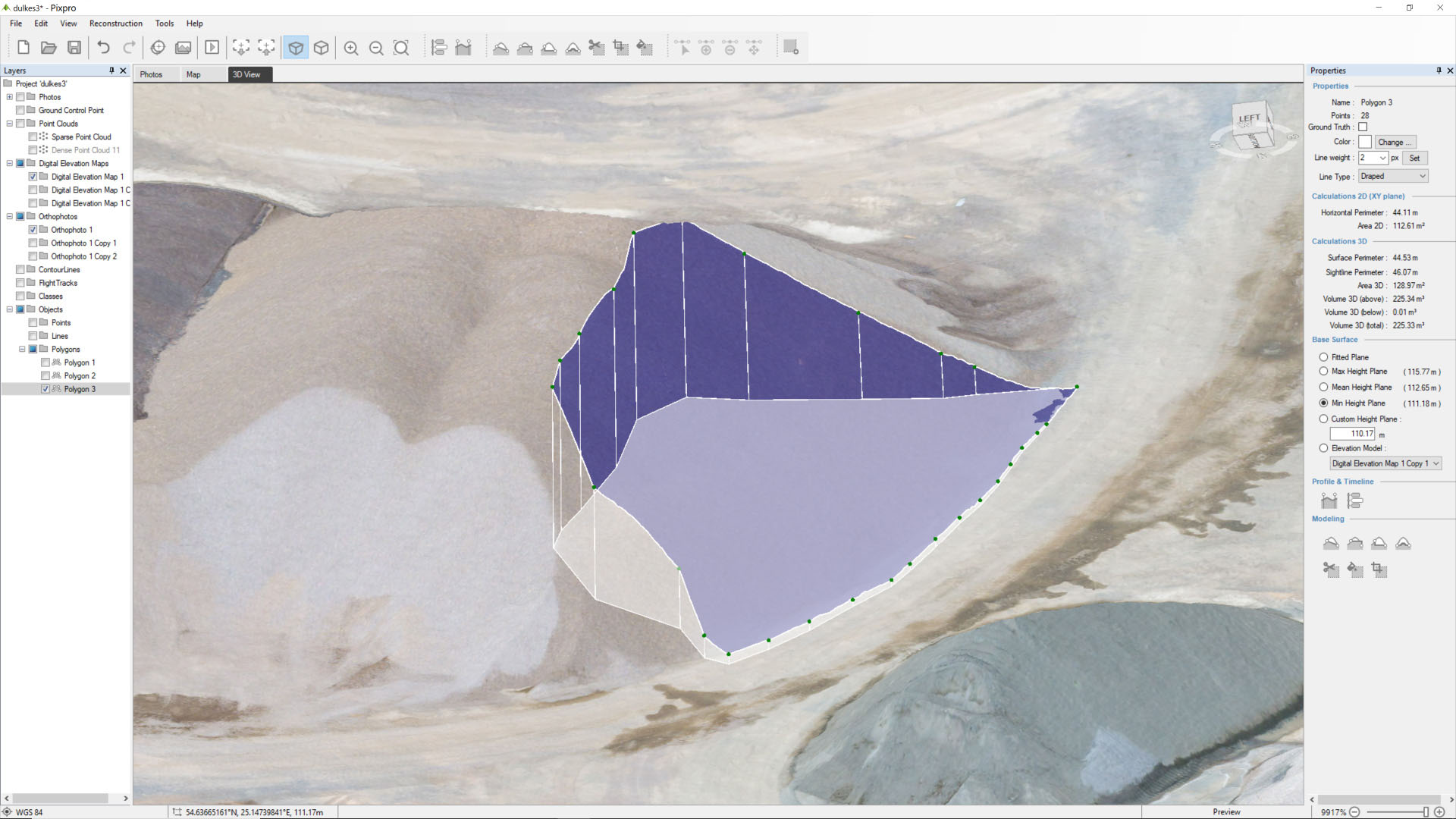 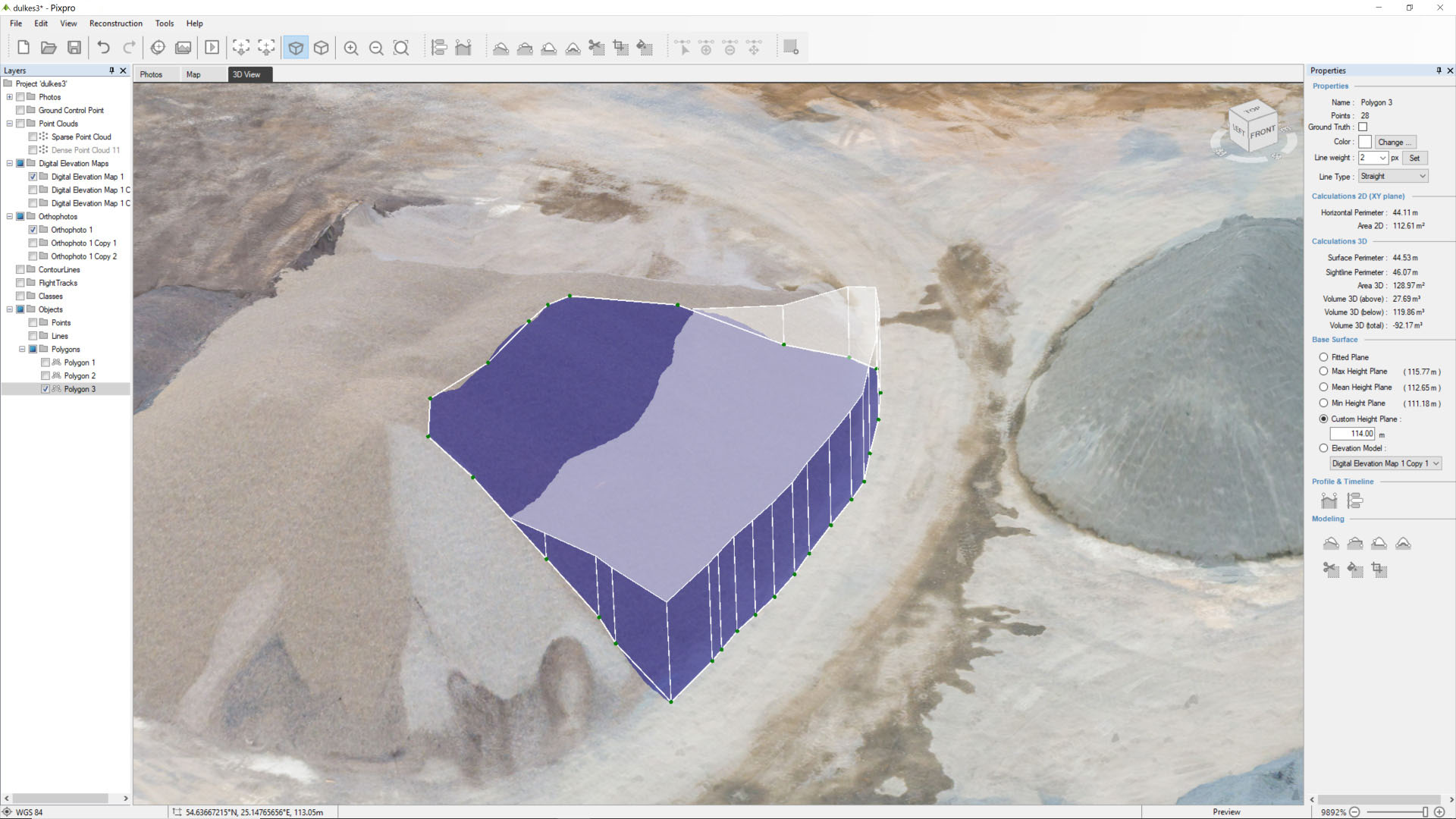 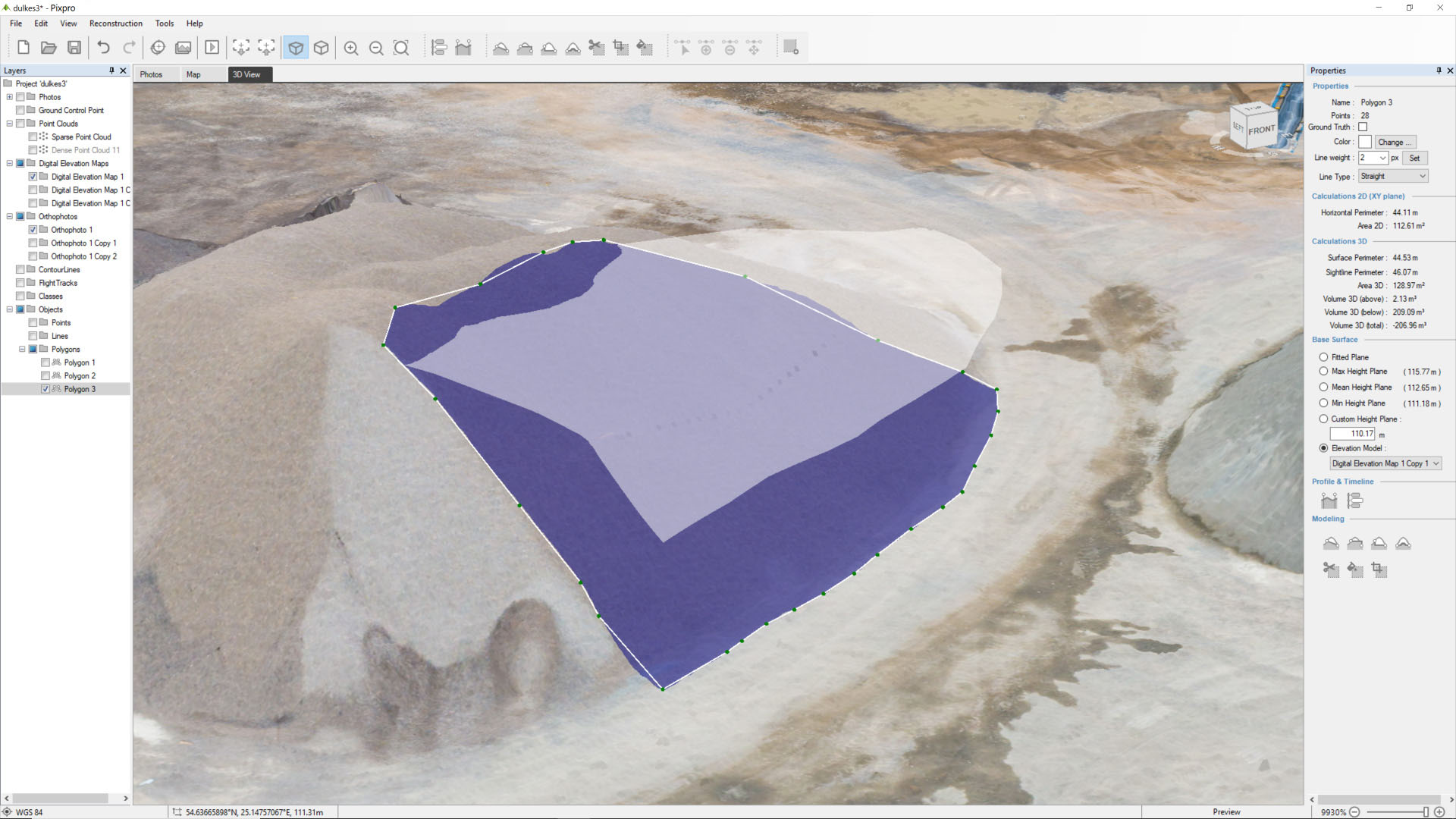 The Timeline option allows making comparison calculations employing different elevation maps either from the current project or from the other project. To make calculations on the Timeline, click Show Timeline on the Properties Panel or in the toolbar. A polygon has to be drawn and selected for the timeline to work.

A closer look to the timeline panel with calculations already made:

To begin the calculation in the Timeline Panel, click Add DEM From... another project or the current one. To add a DEM from another project user has to navigate in Windows to import a DEM from a location of another project. Current project will become the base project for the timeline measurements. The base project will be the base reference for all the timeline calculations and should be used for creating artificial GCPs as described further. For another DEMs to be appropriate for timeline comparison identical georeferencing is required.

If there are no survey grade GCP's made for the comparison, but the area is the same, your own "artificial" GCP's can be created to eliminate the georeferencing differences between the projects. How to create artificial GCPs for timeline purposes see further below.

In addition the GSD, Smoothing and Hole Filling values should be the same on all DEM's.

Add another DEM for comparison. From the Base surface dropdown menu choose the base plane type which should be used for calculation. Click Calculate button. The table fills with calculation data. Timeline is read from top to bottom. Accordingly difference numbers are in relation to the first row. If the current list order is not correct it can be changed using Move Up and Move Down buttons. If all seems correct timeline can be exported as a table in .csv format. To close the timeline, click Close Timeline. Below a typical 3 digital elevation map comparison with the selected polygon. NOTE: remember that in the graphic window only one DEM is visible at once, but the calculations do take all the selected DEM's into the equation. 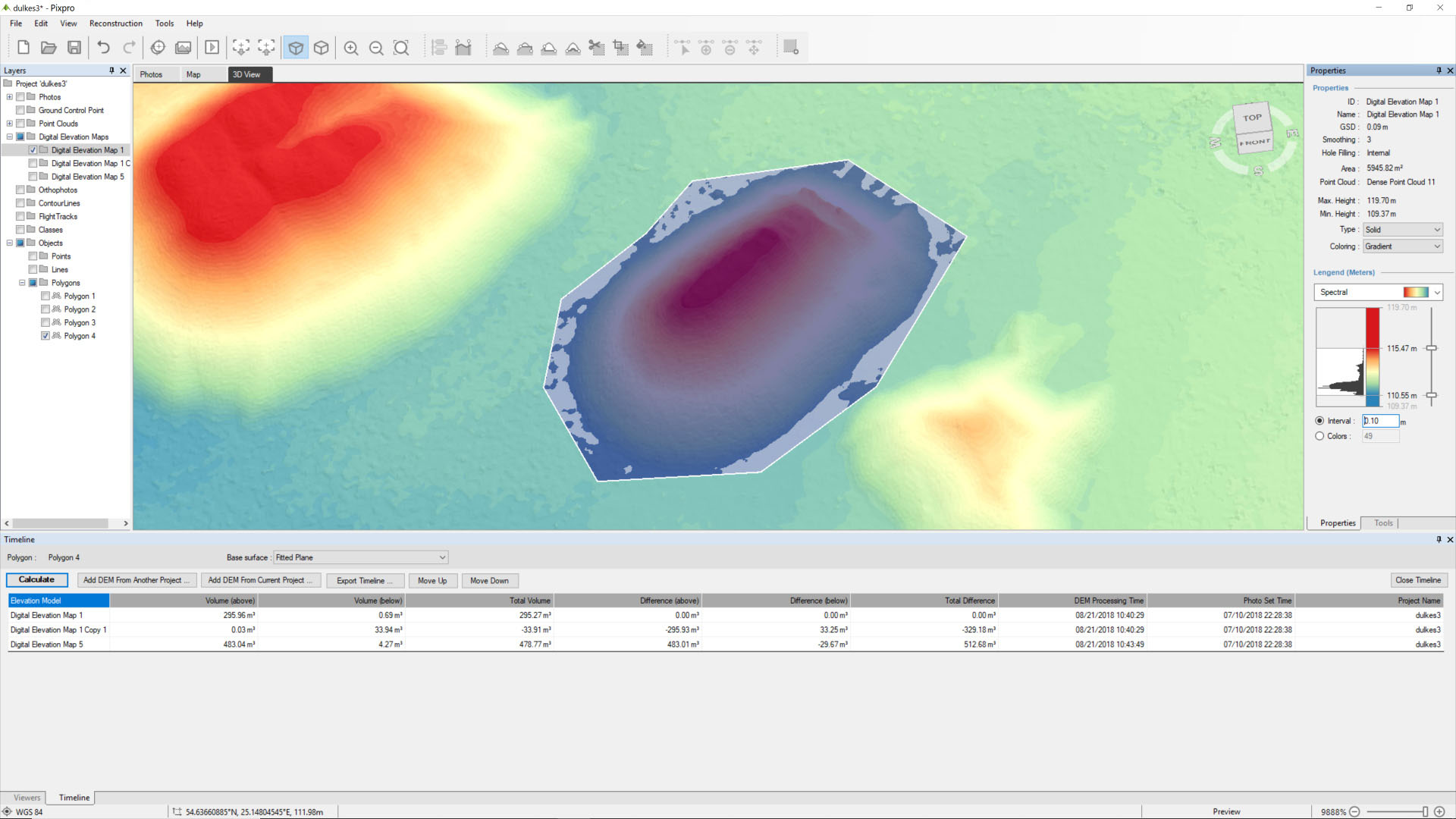 For comparison purposes one can create artificial GCP's to equalize the georeferencing on a few different projects. This is necessary because the consumer grade GPS information found in images is not reliable. Even if the exact same area is photographed using a drone the GPS data will not be the same or even close to being precise enough for measurement comparison purposes. In Pixpro we can create GCP's that are based on one of the projects needed for comparison and then use that project as a base.

For artificial GCP creation there are a few requirements: all 3D reconstruction projects must have enough physical objects that were absolutely stationary and unspoiled during and inbetween the scans. This means that these objects did not change in any way, when the pictures were taken and during the time gap between different scans. In addition those objects must be clearly visible and have a visual feature that can be used for precise point placement. For example a concrete block itself is not a useful object, but its corner can be used for precise point placement. Precise point placement is what enables us to make these artificial GCP's. Also such factors as vegetation and surface reflectance should be taken into account. These factors can cause some 3D reconstruction noise which can throw off the accuracy of the GCP placement. It is always best to use solid, easily identifiable features that are part of stable and well reconstructed surfaces. If necessary new objects can be placed physically to ensure that future scans could be aligned. These new objects should follow the requirements mentioned above.

For best results all compared scans should be identical. In case of aerial scanning the same flight plan should be executed to gather data. Identical flying height, amount of pictures, overlap. Ensuring these factors will make using the timeline more precise.

To get the best georeferencing results the area should be evenly covered by the artificial GCP's, ideally, at different heights. Below an example of artificial GCP distribution. 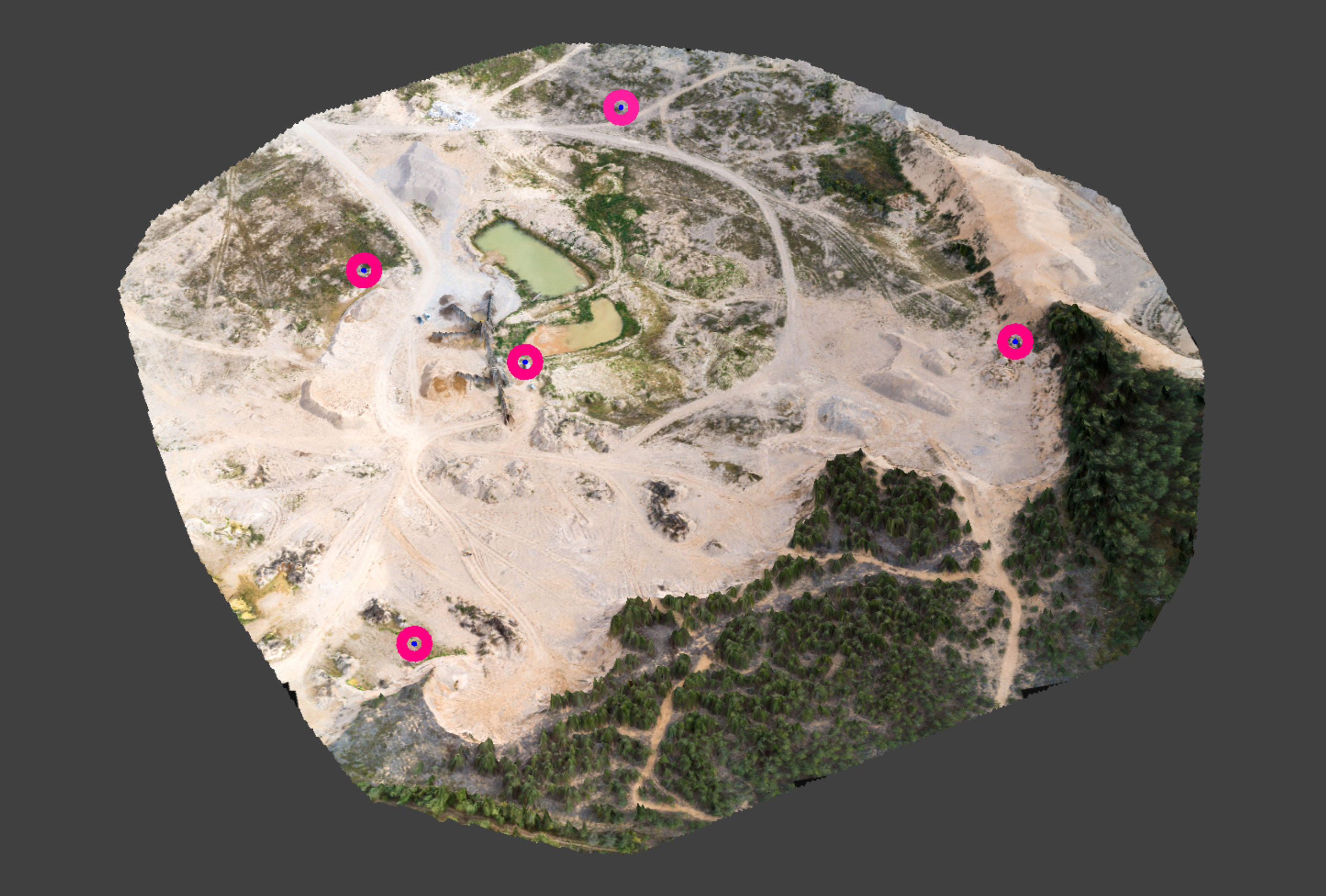 The more GCP's are created the better, but the distribution is equally important.

To create these artificial GCP's first we add approximate point:

Press right mouse button on points layer and choose add point. Add this point on the DEM or the Dense Point cloud. Choose a suitable object as described before.

Then double-click on the point to edit its projections. Projection editing is described in Measurement by Object - Point part of the Measurement workflow and examples page. Edit all projections so that the point would be placed as precisely as possible in a chosen location. In our case its a corner of a small metal shed and the precise point placement looks like this: 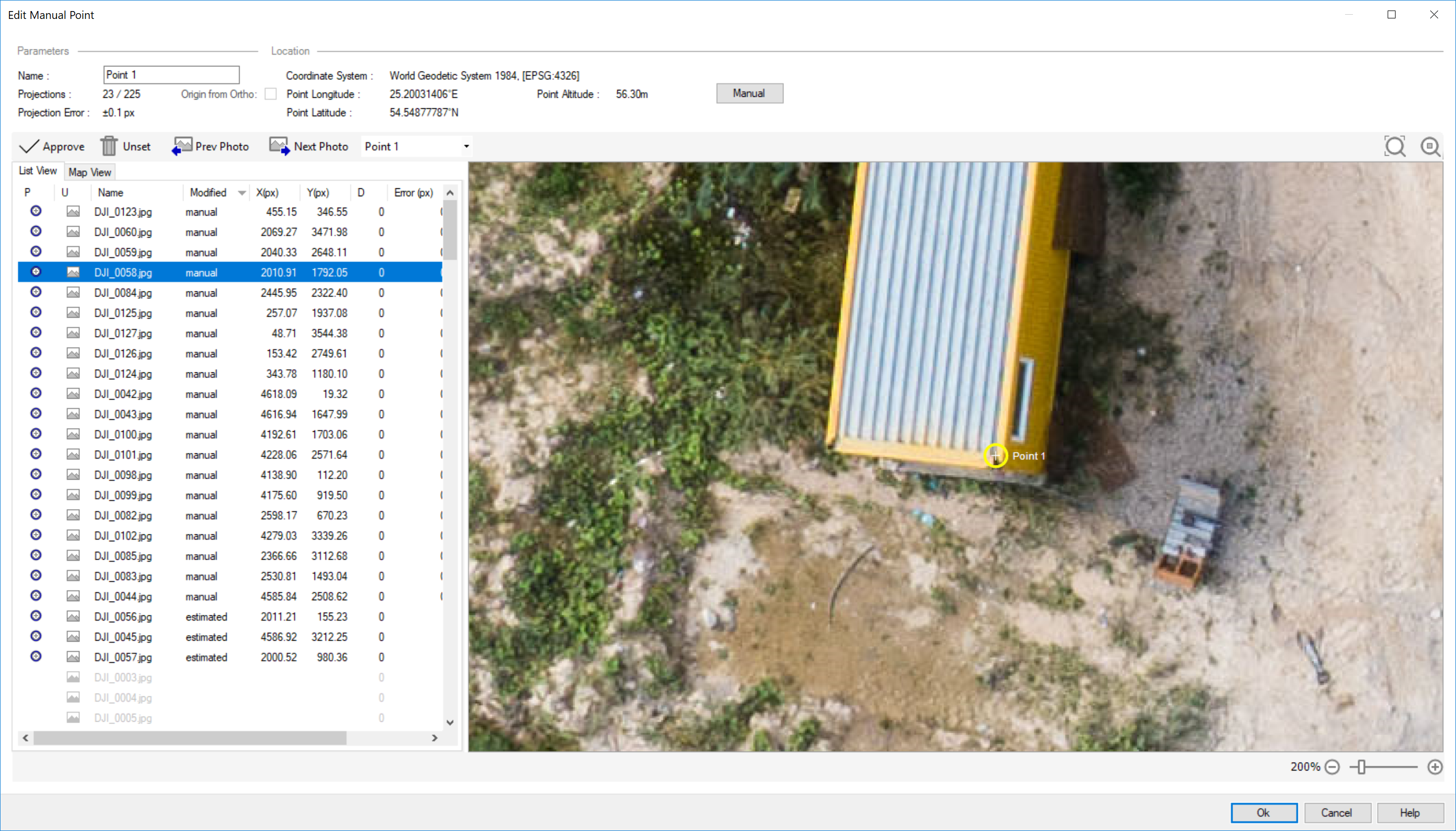 Now that we have a precisely placed point we can add a GCP. Right mouse click on the Ground Control Points layer and select Add GCP. Now make sure that the snapping is enabled and the snap button

is blue. Add the GCP by snapping it to the precisely placed point.

Repeat this process for as many GCP's as necessary for good area coverage. No less than 3 GCP's is required, more is better.

After all required GCP's are added, it is necessary to export them and use them for georeferencing in this project. To georeference the project go to Georeferencing and click on Georeference to Ground Control Points. To export the GCP's for using on the other project press right mouse button on the Ground Control Points layer and choose Export GCP. When export coordinate system dialog appears press ok. When the export window appears choose a name that you like and select the PXG format. Using this Pixpro native format we will save time when later importing these GCP's. Alternatively GCP's can be exported in popular .csv and .txt file formats.

At this stage we have the georeferecing saved and it is required to apply it for the other project intended for comparison. Do the processing required for the other project (only the reconstruction and dense point cloud is required at this stage), use all the same settings as used for the original project. If the default settings were used for the original project default settings for the new one will probably be fine. After the dense point cloud is created the GCP file can be imported.

To import the GCP file press right mouse button on the Ground Control Points layer and select Import GCP. Then navigate and choose the file you made previously. After import GCP's should appear in the layers panel.

After editing projections on all the GPC's go to the Reconstruction tab and press Georeference to Ground Control Points. If all is well the projects now should be identically georeferenced. The absolute georeferencing accuracy is not guaranteed but at least it should be good enough for comparison purposes. Orthophoto can be generated also for convenience. Close the project and don't forget to save it.

To begin using the timeline open the original project. Press right mouse button on the Digital Elevation Maps layer and select Import Digital Elevation Map. Navigate to the directory of the second project and import its digital elevation map. After that you can also import its orthophoto and connect it to the imported DEM. Now you have 2 DEM's in your project that are identically georeferenced. Draw a polygon to where the comparison of measurements should be calculated. In the polygon properties panel press the timeline button and the timeline panel should appear. In the timeline panel choose Add DEM From Current Project and select both the original and imported DEM's. After import press Calculate and then the table fills up with calculation data.