The 3D structure creation is a process when a sparse point cloud layer and camera positions are created from the photo set.¶

To begin creating layers and working with Pixpro we need to create a project first:

Here project name and location on the computer can be specified. More importantly the coordinate system of the created project must be selected. There are a few options in the dropdown menu:

Arbitrary - the project will remain in an arbitrary coordinate system for use without any initial GPS information.

Advanced parameters can be expanded and then edited as necessary. If you do not want to delve into advanced settings deeper, just press start, default settings usually work well. The processing time will depend on photo count and resolution. After the process is complete, you should get a sparse point cloud and camera positions in the project.

Main setting in this section is the Processing Speed dropdown.

Fast processing takes the least amount of time but it also requires the best possible image quality. This means that the 'Fast' setting is best for those who are confident that the photos taken for the reconstruction are more than suitable. This includes the overlap, general image quality and object coverage with room to spare. If these aspects are fulfilled, Fast processing setting can be used while saving time.

Medium setting, the default, is usually a good choice for most cases.

Slow setting allows using poorer quality pictures and provides more coverage while taking considerably more time to finish. If the Slow reconstruction setting combined with optimize cameras setting fail - there is a high probability that the pictures were taken inadequately for the 3D reconstruction.

Intrinsics source: shows where the camera intrinsic values came from.

BA or Bundle Adjustment process settings can be changed as well. Local BA is a bundle adjustment process that is performed throughout the reconstruction process, while Final BA is a bundle adjustment process that will be performed only in the last step of the reconstruction. If the intrinsic values are present in the calibration database only Final BA will be used for the reconstruction. This usually yields the best measurement results. If the intrinsic values are not present in the calibration database, Local BA is used, and only the principal point is fixed while all other intrinsic values are optimized throughout the process. In this case measurements can be less reliable and less consistent.

If by any chance user will manually enter extreme intrinsic values, a warning will come up when trying to start reconstruction. If that is the case, just double check if the entered values are correct.

Camera intrisics are also managed through photo set manager, but here one can inspect and adjust those values right before reconstruction. This section is for advanced users looking to experiment. For more detailed information on camera intrinsics management and reuse see 5.1. Photo set manager page.

In this section we can choose whether the prior position and rotation values that come with the photo metadata are used. These options should be used if the said values are known to be precise and correct, I.E. using an RTK drone, or PPK enabled images.

Either Incremental or Hybrid mapper can be chosen. The default is the incremental mapper, hybrid mapper should be chosen if there are problems with reconstructing large amounts of photos (500 or more). Hybrid mapper will change how the 3D reconstruction begins which might result in better results in some cases.

Note 1: rerunning the reconstruction in the same project will result in all layers being deleted.

Note 2: The reconstruction can be done from only a part of the whole photo set. There are two possible ways (both can be used simultaneously) to select a bundle of photos for reconstruction:

After sparse point cloud is created it can be Reoptimized. Reoptimization is an additional process that should be ran if GCP's were added to the project. 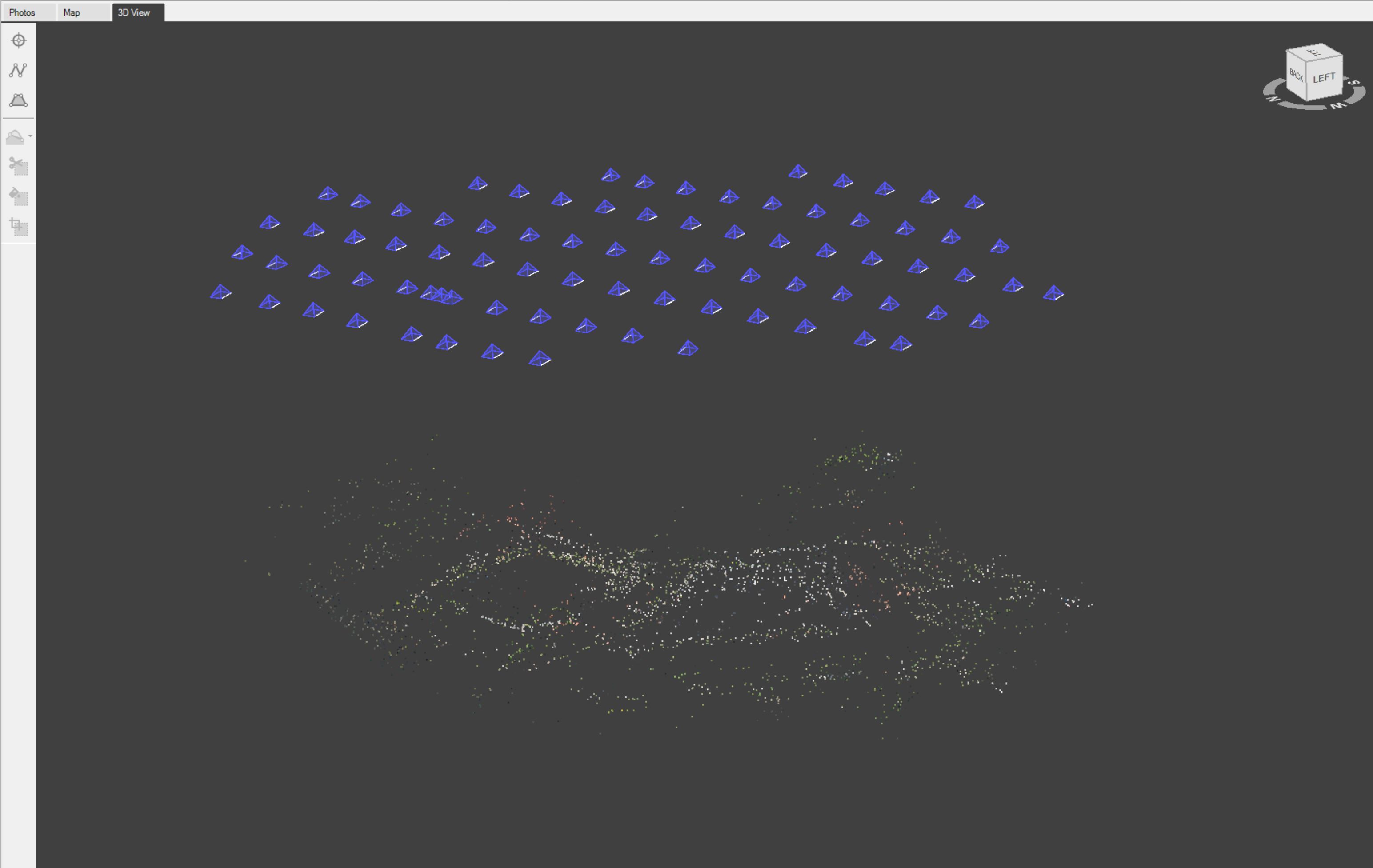 Dense point cloud is the second stage of processing, and it is required to start measuring and creating digital elevation maps and orthophotos down the line. Dense point cloud creation is also the lengthiest step.

Point Cloud Density - High or Ultra High density point clouds will provide more points and better GSD values later as a consequence, but it will take longer to create and will require more video memory (especially in the case of Ultra High density). Low or Light density point clouds will take less time to process while providing less points. Ultra Light density is reserved for getting a result as fast as possible, without any focus on quality. Medium density is a happy medium.

Image Size - Shows the resolution of the depth maps that will be generated. The depth map size depends on the input image size and the Point Cloud Density setting.

Depth maps filtering - Mild option will reduce the number of points while attempting to maintain the overall 3D structure of the scene. This process may require a considerable amount of RAM.

When the generation is finished, the dense point cloud layer appears in the 3D view.

There is an alternative way to create a Dense point cloud by cloning the Sparse cloud. To achieve this press right mouse button on the Sparse point cloud layer in the layers panel and select Clone as Dense Point Cloud. Then a small dialog will appear asking whether the point projections should be taken from two or three pictures. Two means that more points will be cloned, but there may be more unreliable points. Press OK and the cloned Dense cloud will be available to use for creating a DEM and Orthophoto. This workflow is only recommended when Orthophoto is needed urgently.

Any existing point cloud can be cloned by pressing right mouse button on the Dense point cloud layer and selecting Clone. Clone dialog will appear and will suggest cloning the tree of layers associated with the point cloud.

Dense Point Cloud layer is the stage where Bounding Box usage is often highly recommended. A bb box is a cube shaped 3D area that can be adjusted by dragging the cube face to crop out dense point cloud points. This can be useful if the point cloud is unnecessarily large for the intended object. Using the bounding box may result in better looking models, shorter processing duration in further stages and overall tidier results. 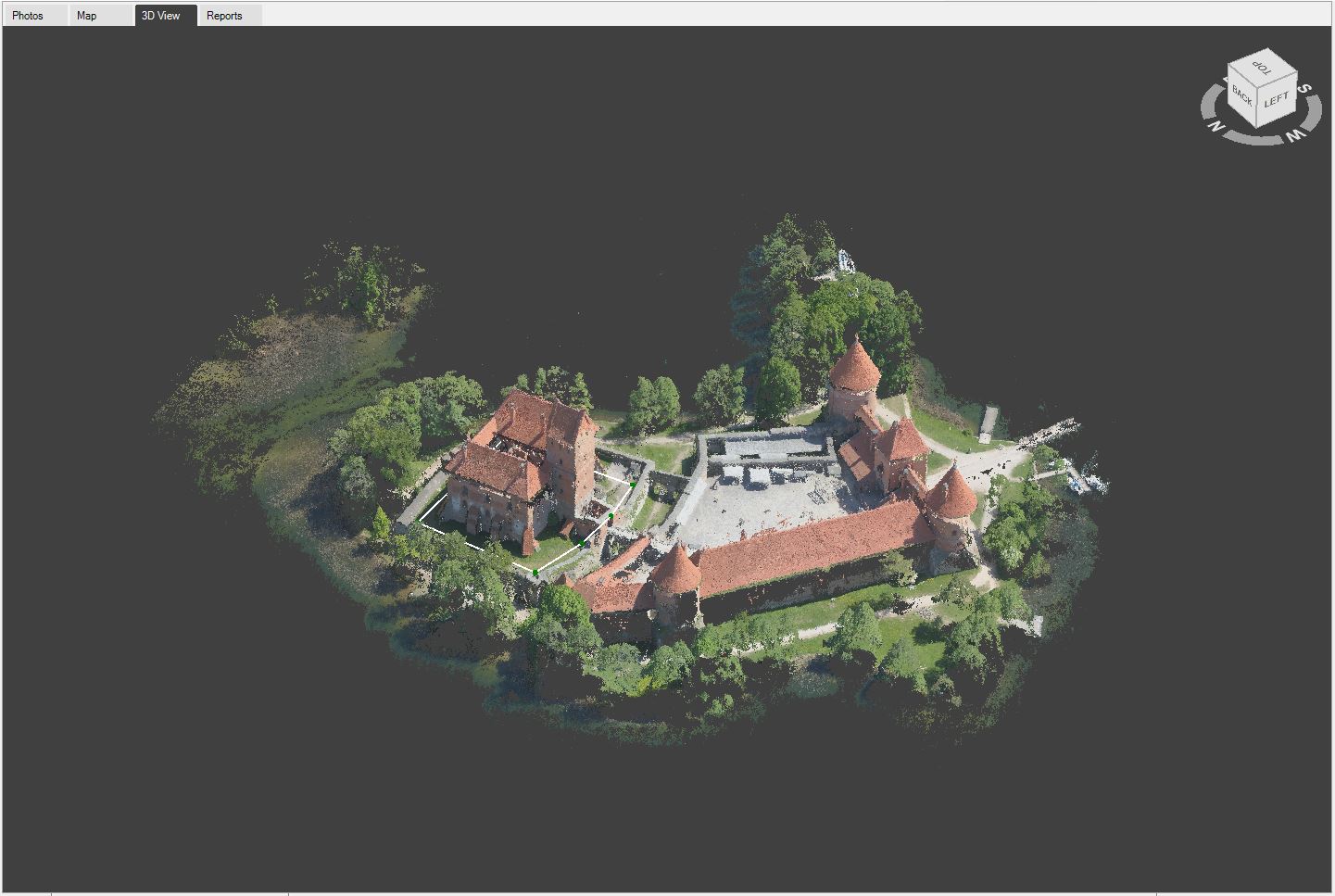 Mesh is a 3D surface created from the point cloud and textured using raster data from photos. To generate a mesh go to Workflow and choose mesh. In Generate Mesh window a few mesh generation parameters can be selected.

DEM or Digital Elevation Map is a 2.5D representation of the scanned area and it is created from the dense point cloud. It can be shaded with various options and used for all measurements (volume cannot be measured on any other layers).

Before creating the DEM it is recommended to inspect and use the bounding box on the Dense point cloud. Bounding box is generated automatically after creating each dense point cloud and it can be changed or reset altogether at any time.

After all parameters are selected press start and the DEM will be generated. This process is usually a lot faster than 3D structure or dense point cloud steps.

When the generation is finished, the layer appears. NOTE: If other layers are enabled simultaneously with the DEM, all graphic object drawing will be done on the uppermost layer. It is always recommended to have only one layer enabled when adding new objects.

DEM shading can be changed in the Properties panel. A Legend should be visible that allows changing the visual shading appearance: 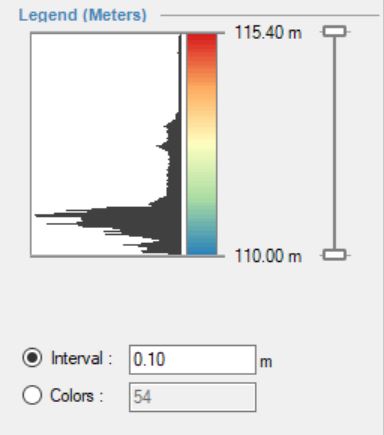 Vertical slider is used to set the low and high points on the histogram. Adjust the vertical slider until desired visualization is achieved.

Interval value represents the thickness of a single color interval. The smaller the value the smoother the DEM will appear.

Colors value defines the amount of colors desired on the DEM. The thickness of a single color interval will be calculated accordingly. 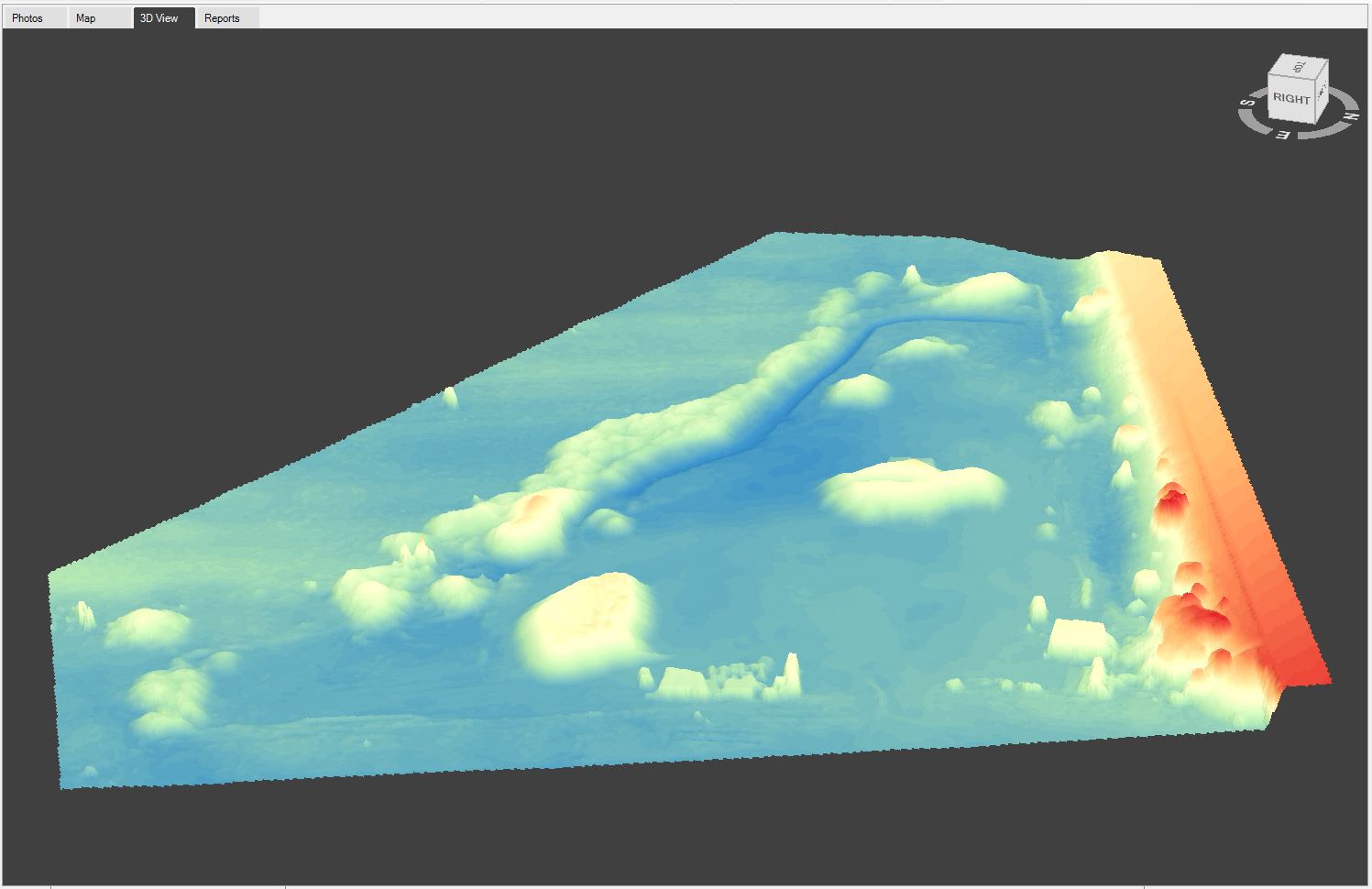 Orthophoto is an orthorectified image representing the scanned area. DEM is needed to make a true orthophoto.

Further only two parameters are present: GSD and Color Correction checkmark. The smaller the GSD value is, the higher resolution orthophoto is created. Suggested value is 4 times smaller than the used digital elevation map. The value can be even smaller but expect longer processing times for high-resolution imagery. Color correction is recommended if the lighting conditions were changing during the scan, or the scan is combined from photos taken at different times. Color correction further increases the processing duration. 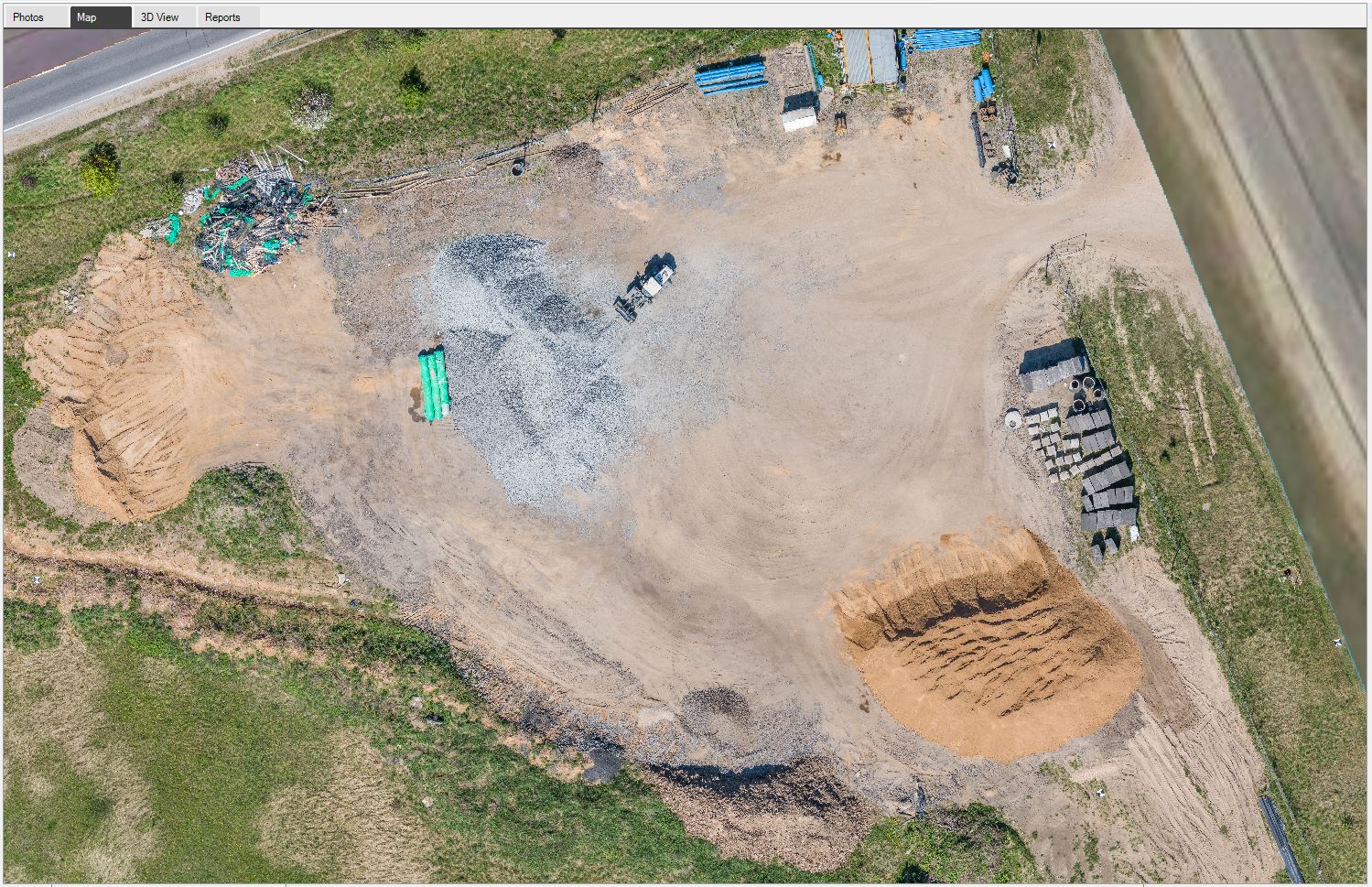 If the contour line generation failed with a message stating the digital elevation map is too hollow inspect couple of things: 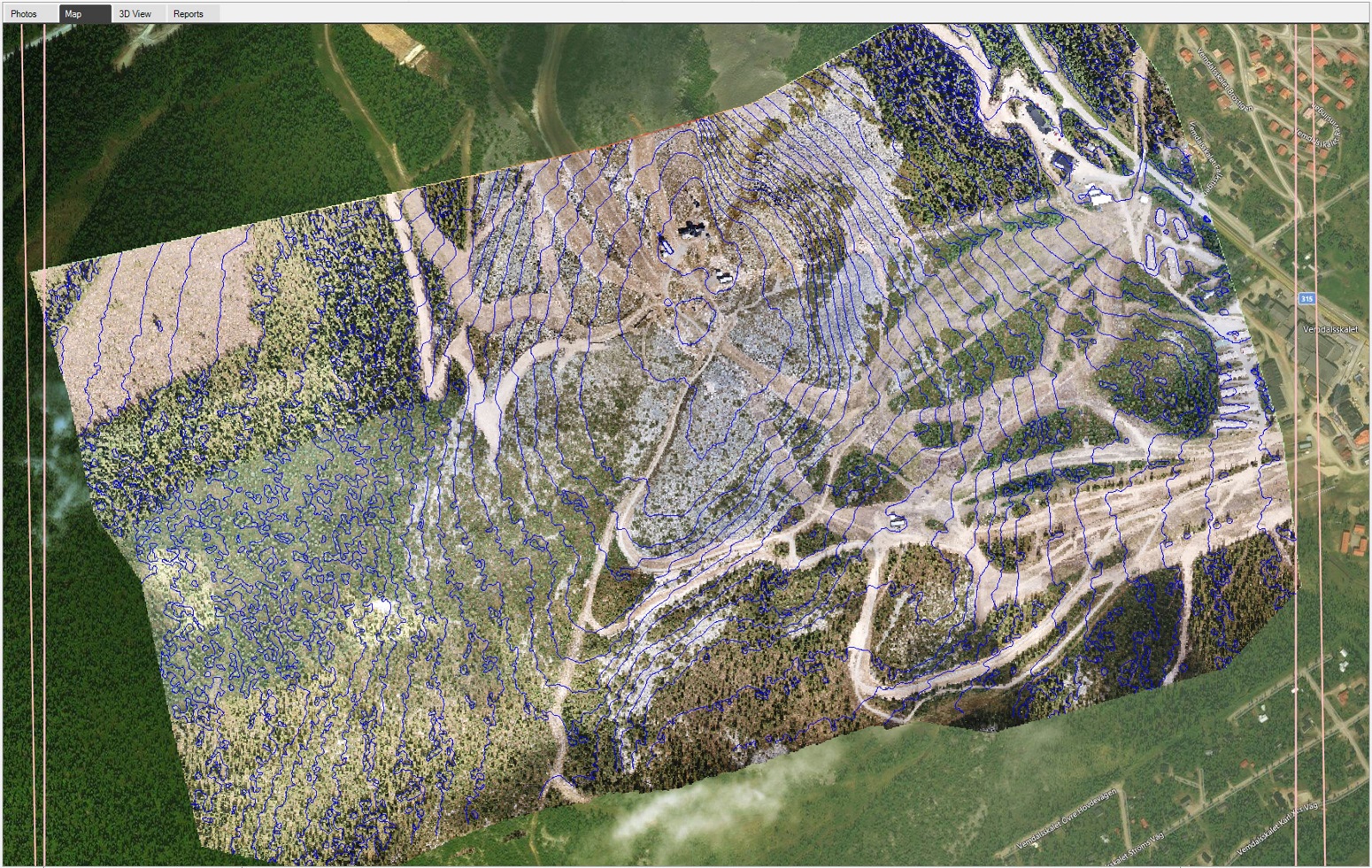 To generate breaklines go to Workflow and choose Breaklines. There are three settings that can be chosen:

After selecting these settings press start and the generation will begin. After generation is complete breaklines will be displayed. They can be viewed as a single visible layer, or combined with any other available layer.

When a breakline layer is selected, alternating line colors can be chosen in the properties panel on the right side of the screen. Default colors are blue and red.

Keep in mind that current functionality is in early prototype stage.

Full workflow is a single function that lets you generate all the layers sequentially without user presence. To launch full workflow window press

button in the toolbar or F10 key on the keyboard. Full workflow dialog appears: 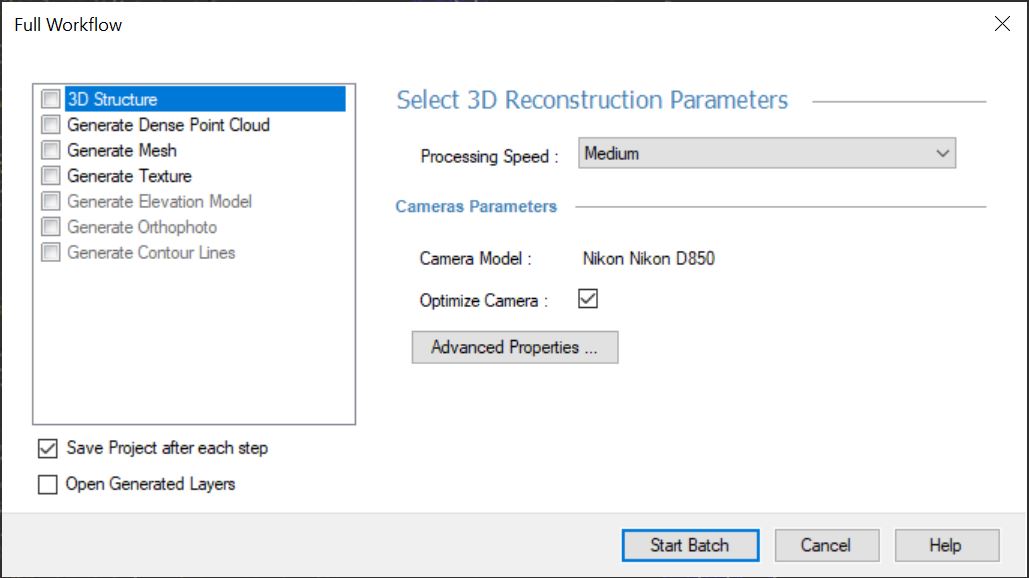 Check whichever layers you would like to generate. CLick Advanced Properties which are identical as described in this chapter for each layer accordingly except for Use the last generated (item) checkmark. Use this checkmark in the case of new layers being generated on top of existing layers. For example, if there is a dense point cloud already present in the project, you can generate a new one and use the newly generated point cloud for the DEM creation. In this case enable the Use last generated (item) setting.

After choosing all the settings and being sure that they best fit your needs you can save them as a preset, and then load these settings so there would be no need to enter them manually again. To use this function use Save as Preset and Load Preset buttons accordingly.

To save time even further enable the Load Generated Layers checkmark so after the generation, all layers will also be loaded without any user input eliminating any waiting times before doing measurements or other work.

If you are in possession of the cloud processing version of the Pixpro software, you have the option to offload the processing to our servers.

Cloud processing is the last entry in the Workflow menu.

To have you project processed on the cloud - create a project and load pictures the usual way, as described the 3D Structure creation part.

After the coordinate system is selected and images are loaded, go to Cloud processing in the workflow menu.

At this time only standard workflow is available, which means no GCPs can be used when using cloud processing.

Use the available commands chronologically:

Upload and begin processing - uploads the images and starts the processing in the cloud servers as soon as possible.

Download and open the project - downloads and opens the project locally. You will receive all processed layers. Processing settings will be the default - medium settings.

When the processing is complete, you will receive an email about the completion of your project. Also Refresh button can be used to refresh the status of the processing.